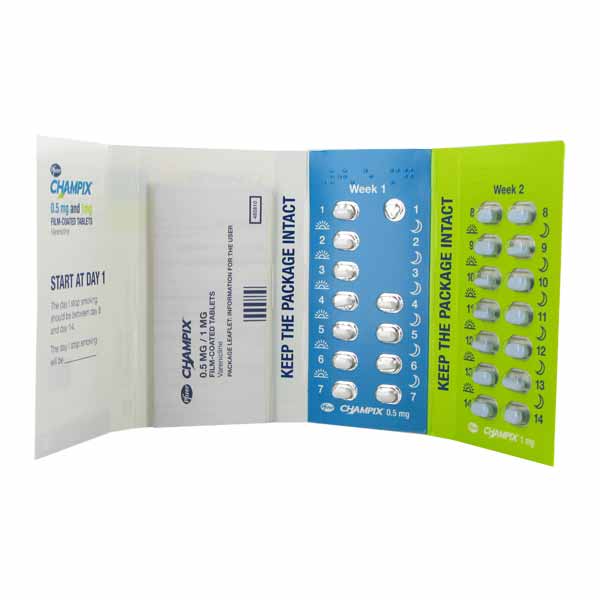 We all know how harmful smoking is for our health and the devastating impact it has on the long-term. However, quitting smoking is very difficult. Fortunately, these days it is possible to receive medical help. Champix, with its active ingredient varenicline, helps you become a non-smoker by stopping your urge to smoke. According to a study done in 2013, every third person in Britain smokes and the heaviest smokers are teenagers. A lot of people already tried to quit many times, but dependency is often underestimated. Only three percent of smokers, who try to stop smoking without any means, are still not smoking after one year. Besides, the percentage of relapse smokers is very high. According to a survey, smokers need six attempts to finally be freed from the burden of smoking!

Why is it so difficult to stop smoking cigarettes?

Nicotine is a neurotoxin and reaches the brain after seven seconds, to release dopamine. This neurotransmitter elicits a feeling of reward. As soon as the dopamine level decreases, withdrawal symptoms appear. In many cases, psychological and physical dependency is under-estimated; therefore, attempts to quit fail. An additional obstacle is the reliance on a habit, as many smokers habitually look for a cigarette in certain situations. The stronger the dependency, the greater are the physical withdrawal signs. Fortunately, nowadays, medical assistance is available to help weaken those symptoms.

Symptoms you can experience after quitting smoking include:

There are many potentially successful methods to help quit smoking, especially if the patient is perceptive and understands that the success of a method depends on the patient’s will. In other words, if a smoker truly wants to stop, a variety of methods for quitting smoking can succeed.

Hypnosis can assist whoever is motivated to become a non-smoker. Hypnosis de-programs and cures the deep psychological reasons for smoking. The therapist embeds into the subconscious that smoking is no longer important and that from now on, the patient loves fresh air and can no longer relax with a cigarette.

These methods provide relief for smokers who find themselves in places where it is forbidden to smoke (airplanes, hospitals, or closed spaces). However, they are not always successful in giving up smoking, as they only postpone the causes, instead of treating them. Fortunately, even these methods have their share of success stories.

Withdrawal symptoms such as severe nervousness, edginess, and concentration difficulty can be successfully treated with acupuncture. This Chinese healing method calms the nerves and improves blood flow to certain organs, such as the lungs. For patients who have successfully quit smoking, acupuncture can restrain the appetite. However, in order for this method to be effective, the patient undergoing acupuncture has to subconsciously know that she or he does not want to smoke any more.

There is a medication that acts directly on the brain and de-activates the addiction center: Champix. Champix contains the active substance varenicline and is nicotine free. To explain, Varenicline occupies the receptors of the nervous system, causing a blockage of the neurotransmitter dopamine that is released during smoking. In other words, the feelings and sensations that nicotine elicits are no longer felt. On top of that, the withdrawal symptoms become weaker.

How should Champix be used?

The withdrawal therapy with the medicine Champix extends to over 12 weeks. The cure starts when the patient is still smoking. Thereby, the body gets used to the active ingredient varenicline, as well as to the continuous decreasing nicotine supply. Two weeks after the beginning of this treatment, smoking has to be stopped completely, since the effect of Champix relies on a graduated scheme that is explained more thoroughly in the Patient Information Leaflet. One pill has to be swallowed whole, every day, at the same time.

You can order Champix online, right here, on our platform Apomeds. To get a prescription, all you need to do is complete a medical questionnaire. After that, our EU-licensed doctors will review your answers and issue you a prescription. The product, along with the prescription, will be delivered to your home within 48 hours!