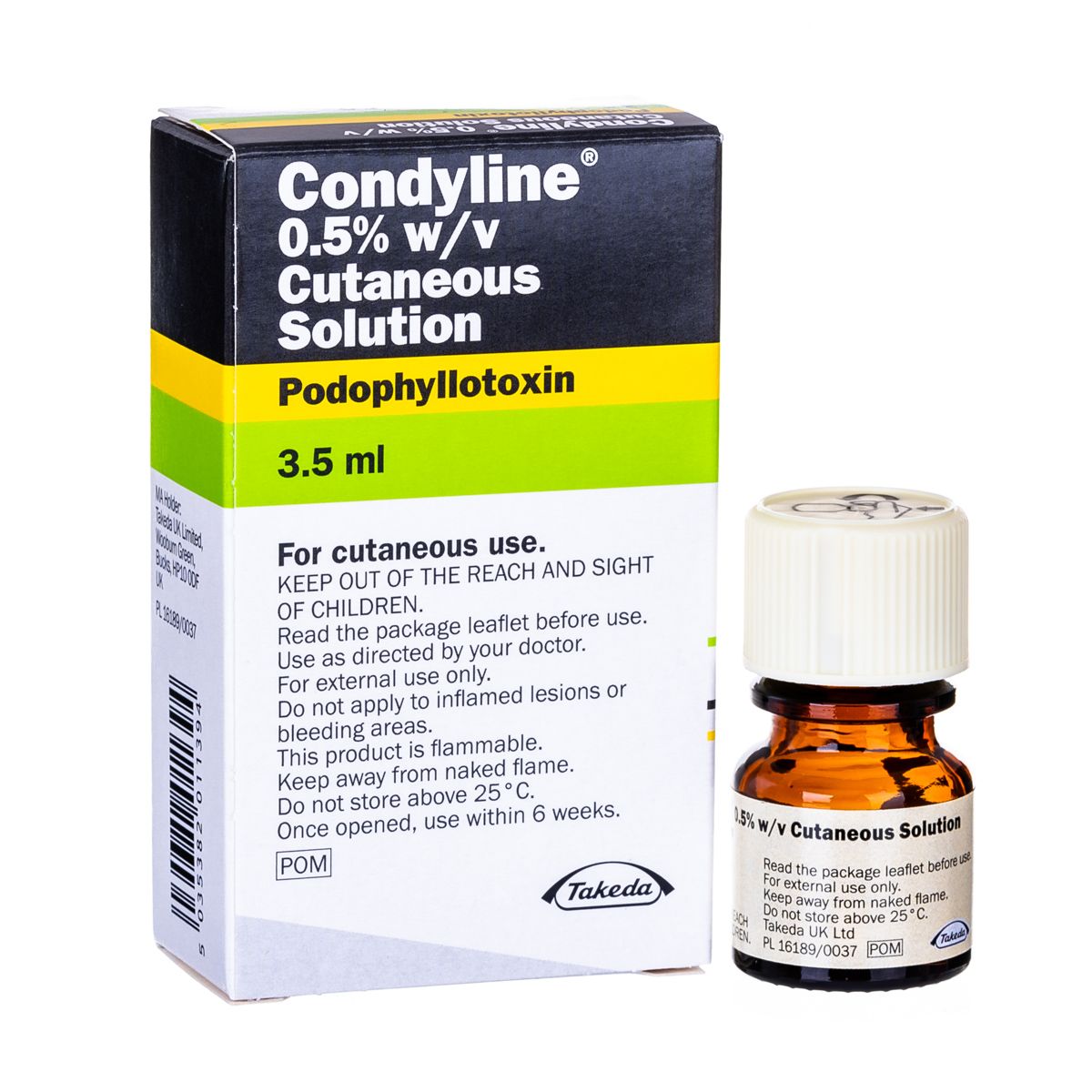 Condyline is one of the most effective cures for combating genital warts. If you suffer from genital warts, you can now order the solution together with an electronic prescription, at Apomeds. The Condyline solution is normally used as a dose of 5 mg/ml, and helps to eliminate the genital warts, thus saving surgical removal of the warts.

EU CERTIFICATION We are registered and approved to sell online medication.

Condyline derives from the podophyllum root extract of the berberidaceae family and fights genital warts, including their spreading process. After the treatment, the infected cells are killed and the warts are eliminated. The medication is intended for external application only. Condyline is considered one of the most effective treatments for genital warts on the market.

For the treatment of genital warts, the solution must be applied externally. The active ingredient, derived from the podophyllum root, interferes with the growth of warts and stops them from spreading. After a few days or weeks of treatment, warts will be fully eliminated.

What is the effect?

The active ingredient, podophyllotoxin, stimulates the body's natural defenses. Researchers have shown that the drug eliminates genital warts by binding the intrinsic immune cells and increasing the release of alpha interferon. This protein acts by blocking the growth of harmful cells, like the genital warts infection. Even if the condition is in an advanced stage, the drug can lead to the rapid elimination of genital warts.

How to apply the solution

Condyline must be applied directly to genital warts with an applicator and then gently rubbed in. Repeat the process twice a day, for three days. Before applying the cream, clean the affected areas with soap and water. Do not forget to wash your hands after application.

In contrast with Aldara, another remedy for the removal of genital warts, Condyline does not have to be washed off the affected skin. It can safely remain applied to genital warts. In case you do not reach the desired results after three days, the process should be repeated up to a maximum of five weeks. If genital warts have not been eliminated at the end of this period, contact your doctor to seek a solution. To explain, apart from the creams, there are other treatment options, such as laser treatment, scraping, surgery or icing of warts.

Although side effects do not typically occur, you might experience them. However, they usually go away on their own and are very mild.

Common side effects include:

If you experience any of the above symptoms, contact your doctor. Read the Patient Information Leaflet for additional information on side effects, contraindications, and drug interactions.

Contraindications and interactions with other medications

So far, there aren’t any proven interactions with other medicinal products. It is advised to not consume alcohol during the treatment, as it may weaken your immune system and increase the risk of unwanted side effects.

Do not use Condyline if you have:

Also, do not use this product if you are pregnant or you are currently breastfeeding. Condyline is not recommended if you are younger than 18 years old of age.

AtApomeds we have a highly effective wart remedy called Condyline. After using this product as instructed by the doctor, within a short time, genital warts will be eliminated and your skin will regenerate. The Condyline reviews are generally positive and it is regarded as one of the most effective products on the market against genital warts. Next to Condyline, we offer the Aldara and Warticon creams for the treatment of genital warts. More information on how Apomeds works can be found here.

Disclaimer: Please note that the drug shown in the picture indicates one of the possible manufacturers of the drug. We might send you a drug from a different manufacturer. All products comply with the highest EU standards.

If you choose this option, you must send us your original prescription by post to our address in Wilich, Germany.