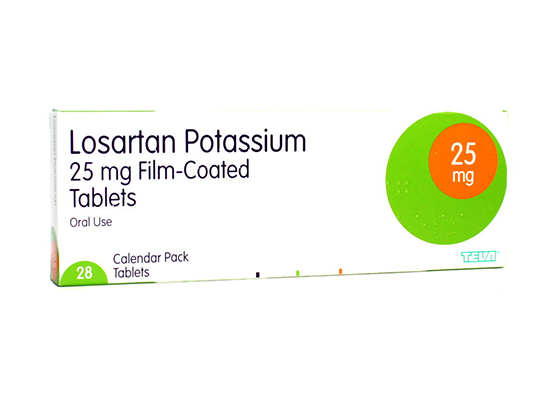 LegitScript Certification We operate safely and in compliance with LegitScript's highest standards for healthcare merchants.

Registered pharmacy The EU pharmacy seal guarantees the registration of the mail-order pharmacy.

Losartan is one of the most prescribed hypertension drugs. It belongs to the group of sartans or angiotensin receptor antagonists (ARB). To explain, sartans are receptor antagonists of the ACE receptors and in addition to the ACE inhibitors and beta-blockers are the most important drugs for lowering blood pressure. They block the docking site or the receptor of the hormone angiotensin II, suppressing its action. Normally, this hormone causes a rise in blood pressure because it provokes vasoconstriction, decreased kidney circulation, as well as increased recovery of sodium ions and water in the kidneys. Sartans have relatively few side effects as they interfere with the hormone control loop later than the ACE inhibitors.

The natural regulation of blood pressure is a normal body function. When more energy is needed, your body automatically increases blood pressure and decreases it during periods of rest. A disturbance in this natural system can lead to high blood pressure. Unfortunately, in most cases, there are no symptoms. Therefore, the patient does not notice when hypertension gradually gets worse. Constant unnoticed hypertension affects small vessels in the eye and kidneys. As a result, long-term unrecognized hypertension may result in loss of vision and severe kidney dysfunction. In order to prevent consequential damage, you should adopt a healthier lifestyle that involves sports, a balanced diet. You can also take antihypertensive medication.

How does Losartan work?

Losartan is one of the most important antihypertensive agents and was approved in the US in 1995. Since it is a relatively new drug, it can be taken over a long period. Losartan is a sartan or angiotensin II receptor antagonist. It inhibits the formation of vasoconstrictor messengers, such as angiotensin II. Also, it enhances the formation of vasodilators, such as bradykinin. When you take this medicine, your blood pressure is regulated and the heart is relieved.

Who can take Losartan?

The drug is recommended for healthy adults who tolerate the drug and don’t have other serious health issues. Pregnant and breastfeeding women should use the medicine only after consulting a doctor. Besides, the drug may be used in children over six years of age, but in a reduced dose, adjusted to the body weight.

n order to have a uniform effect on the body, it is recommended to take Losartan twice a day due to its rapid breakdown. However, the doctor may also advise you to take the product only once a day. The usual dosage is between 12.5 and 100 milligrams per day. Children, adolescents and patients with renal impairment should receive a reduced dose.

The use of machinery and driving should be avoided if larger quantities of Losartan are consumed. There might be other side effects when you take the medicine, but they are mild compared to the ACE inhibitors:

Common side effects include:

Occasional side effects include:

If any of the above or other side effects occur, tell your doctor immediately. Read the Patient Information Leaflet for detailed information on side effects, contraindications, and drug interactions.

Due to its active substances, Losartan can interact with other medications. Also, you should avoid it or adjust the dose in case you have other health conditions.

The following remedies reduce the effect of Losartan:

If renal function is impaired, take a lower dose due to the slow elimination. In impaired liver function, the conversion to the effective form takes longer and the effect occurs later.

For hypertension medications,Apomeds can only issue a follow-up prescription. You can choose your treatment and fill out an online medical questionnaire. Your answers will be reviewed by the EU-licensed doctors we work with. If you are eligible for the high blood pressure medication, the follow-up prescription will be issued to you and sent to your home, together with the remedy, in a discreet package.

Disclaimer: Please note that the drug you see in the picture indicates one of the possible manufacturers of the drug. We might send you a drug from a different manufacturer. All products comply with the highest EU standards.