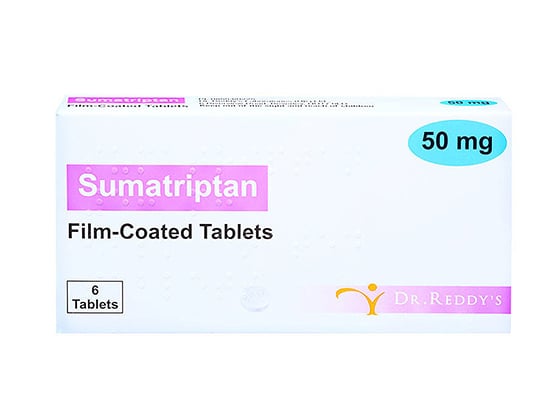 Sumatriptan is a medicine used to treat acute migraine attacks. The drug helps with migraine headaches with or without aura, cluster headaches, and the accompanying symptoms of s migraine, such as nausea and sensitivity to light. The active ingredient found in the medication has the same name and belongs to a group of drugs known as triptans.

Triptans are medicines that act as selective serotonin agonists. To explain, they selectively stimulate the serotonin receptors in the brain and have been specifically developed for the treatment of migraine. This medicine may be taken in the form of tablets, suppositories, nasal sprays, or syringes for self-treatment of acute migraine attacks. Sumatriptan has been approved in Germany for more than 25 years. It is a reliable treatment against migraines and is widely prescribed for its fast and effective results.

How does Sumatriptan work?

During a migraine attack, certain blood vessels in the brain are dilated, inflamed and increasingly supplied with blood, leading to throbbing and one-sided headaches. Through further neurological mechanisms, a person affected by a migraine attack usually suffers from nausea and hypersensitivity of some of the senses, as well. The triptans in Sumatriptan stimulate the serotonin receptors in the brain. Also, the muscle fibers around the blood vessels relax, the blood vessels contract again, the headaches and accompanying complaints being quickly alleviated.

Please note that Sumatriptan is only effective in those areas of the head where the pain exists. Besides, the substance is very quickly degraded in the body. Consequently, the risk of a possible overdose or accumulation of the substance in the body is very low.

How to Take Sumatriptan

Sumatriptan should always be taken as soon as possible after the onset of a migraine attack. However, it can also be taken at any time during a migraine attack, without any loss of effect. The tablets should be swallowed whole, with water or another liquid. The usual dosage is between 50 and 100 milligrams, but the right dosage is set according to the doctor's instructions. If taken in excess of 100 milligrams, no improvement in efficacy is to be expected. Sumatriptan should only be used if there is a clear migraine attack. If symptoms improve after the first dose, no additional doses of the medication should be used. The medication must not be used as a preventive measure, but only in the case of a clear migraine.

As with all medications, the intake of Sumatriptan can cause side effects in rare cases. However, it is unclear whether the side effects are associated with the migraine attack itself or with the active ingredient.

The most common side effects include:

In even rarer cases, the following side effects can occur:

If any of the above or other side effects occur, tell your doctor immediately. Read the Patient Information Leaflet for detailed information on the side effects, contraindications, and drug interactions of Sumatriptan.

Sumatriptan should not be administered at the same time as other medicines.

Be careful not to take this drug in combination with:

The Sumatriptan tablets with vasoconstrictive, pain-relieving and anti-inflammatory properties can quickly relieve your symptoms in the event of an acute migraine attack. You can now order Sumatriptan online, at Apomeds, and have it delivered to your home. After you choose your treatment, fill out the online questionnaire about your health condition and medical history. Our EU-certified doctors will write you a personal prescription, which will be delivered to your home, together with the medicine. More Information on how it works, can be found here.

Next to Sumatriptan we also offer the Imigran nasal spray as a treatment for acute migraine attacks.

Disclaimer: Please note that the drug you see in the picture indicates one of the possible manufacturers of the drug. We might send you a drug from a different manufacturer. All products comply with the highest EU standards.